But first, here's the very first picture Jena ever took of me: 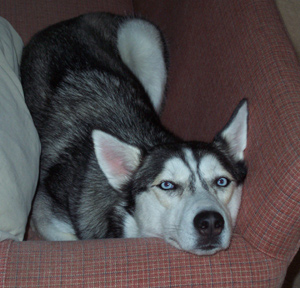 But before that day, I had been out out my own. A nice guy found me. He knew I was a special dog & he tried to find my family. He posted signs everywhere, but for some reason, so one came forward to claim me.

In the mean time, the nice guy realized that he wasn't able to provide me with the home I deserved because he lived in an apartment that didn't allow dogs. And I wasn't exactly quiet because I wanted everyone to know about how special I was!!!! Me!!!!!!!!!

So, the nice guy contacted a Siberian Husky rescue group and they directed him to a person named Jena who had worked with them in the past. (Jena here interjecting that I never did figure out who had told him about me.) Jena agreed to meet him and me after she voted on November 2, 2004 at a gas station parking lot sorta kinda between where the two of them lived. 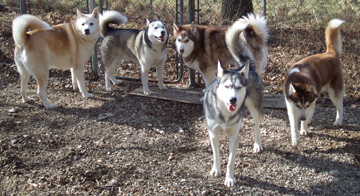 When Jena opened the door, I ran inside the house and found the bedroom and hopped right on top of the bed!!!! 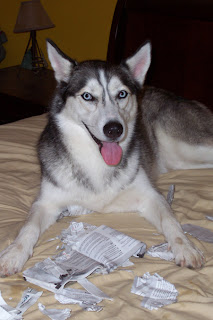 It didn't take Jena very long to decide that I wasn't a foster dog, but instead I was a new member of the pack!!!!! She's smart like that!!!

By the way, the reason that I got the name Aurora is because that first night a very rare appearance of the northern lights (Aurora Borealis) happened above the skies of central Missouri. But I'm called Rooie or Roo Roo because that's my name!!!!!!!!
at 9:15 AM 2 comments: